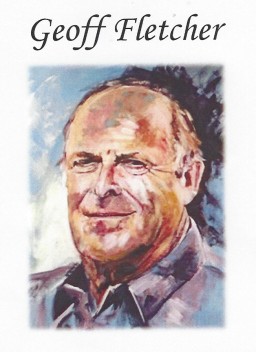 Ultimately becoming a Chartered Shipbroker, Geoff Fletcher was born in Middlesbrough on 24 September 1941, during a period when the town - the first British town and industrial target to be bombed in the Second World War - was being regularly attacked.

After leaving Hugh Bell Grammar School (one of Middlesbrough's most prominent landmarks, a now-demolished grand Victorian building) he entered the world of maritime transport when he joined Constantine Co. (now Constantine Group) and BISC (Ore) Ltd in the town as a Shipping Clerk in 1958.

Promotions followed and after the 1967 nationalisation of the steel industry he became Assistant Distribution Manager at British Steel Corporation (BSC),at itsn its London Head Office.

Promotions to Operations Co-ordinator Shipping (1972) then Ship Scheduling Controller, followed. In 1976 he moved north to become General Manager of two shipping agencies on the Humber (Immingham and Grimsby).

In 1979 he returned to the north-east as General Manager of Teesside Warehousing Co. Ltd, Stockton, a shipping, haulage and warehousing operation, a post he held for almost the next 20 years, after when he became a self-employed Transport Consultant until retirement.

He joined IoTA when working in London, becaming a Fellow in 1988. From 1977 he was a committee member of the Lincoln & South Humberside Centre.

Coinciding with his move back to his home area, he joined the North East Centre committee and was elected Social Secretary, a role he had previously held in Humberside. Appointed Centre Vice-Chairman in 1981, he progressed to Centre Chairman for the 1982-1983 office period.

He was also on the National Council, initially as Chair of the External Affairs Committee, then National Vice-Chairman and finally a Trustee.

He was also active in the Institute of Chartered Shipbrokers, which he entered in 1965 by examination after five years of study. Elected a Fellow in 1998 he was also Chair of its North East Branch.

Outside of his professional life, he was a talented watercolour/acrylic artist, specialising in industrial art (power stations, steelworks, chemical plants, bridges etc),landmarks (such as Giant’s Causeway, Bamburgh Castle and Roseberry Topping) and abstract art.

He combined this with golf, fishing, music, local history, genealogy, cruises and caravanning in the UK and Europe.

IoTA was always very close to Geoff’s heart and he valued the long friendships he made over many years and along with his wife Eileen, who survives him, they had very special memories of the many National Conferences they attended.

Remembered with great fondness by all who knew him, he died on 28 September 2019, four days after his 78th birthday.