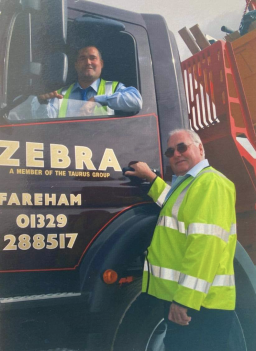 The death has been announced  of an early pioneer of the skip hire and waste transfer sector, Roger Bird, who was most recently with Hampshire-based Taurus Waste Recycling.

Roger, 78, retired two years ago but retained a big interest in both the business and the wider sector where he had many longstanding friends, son Garry Bird relayed.

Roger heralded from Kent and was in the merchant navy on the Windsor Castle for several years. In Kent he first worked in the waste and recycling sector for Purle Waste, at a time “when tankers were known as slurpers and the rubbish lorries as gobblers”, said Garry.

He was asked to set up a depot in Waterlooville in the mid-1960s, which explained Garry, meant a six hour drive back in a lorry to Kent to return home at weekends.

The family moved to Waterlooville around 1970 living in a house adjoining the Purle yard. Subsequently, in 1971 Purle was bought out by the Redland brick company to form Redland Purle.

A later sale saw the waste business of Redland Purle sold to Cleanaway, part of GKN-Brambles in 1984.

Roger Bird then opted to leave the business and join Terry Mills who had a waste and skip recycling business, A&J Bull in southern England and Roger set up AJ Bull Solent as managing director, with Garry joining as the company’s first driver.

That business grew organically and through some acquisitions too. It was then sold to SITA UK, now Suez UK.  Roger and Garry stayed working for AJ Bull for a while before leaving and returning to the construction and demolition sector with the creation of Taurus Waste Recycling which today has five centres and 74 lorries.

Roger, who passed away on 22 June 2021, was a director of Taurus and sister company Zebra Waste until his retirement. Today the business is run by Garry along with Stephen Mills, Philip Scarborough and Keith Cartwright. Garry’s son George has also recently joined the business.

Garry Bird said: “My father always saw the waste and recycling sector as such a big part of his life. He always enjoyed the work and saw such huge change from the early days to today’s more modern industry. He always said that he had made true friends across many businesses and in customers too over the years and I know how much they all meant to him.

“We will miss him tremendously but aim to build on everything he achieved and continue his enthusiasm for life, family and the waste sector.”