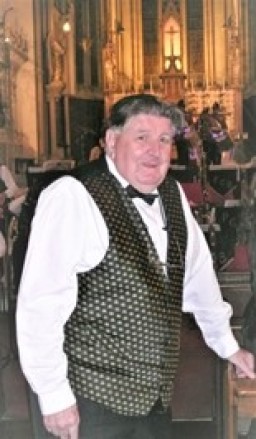 Bill was born in Bedford on 19th October 1928 - son of Minnie and Thomas Jefferies and had a Brother, Daniel who was 10 years older.   When he was young his family moved to Lancaster to be nearer other family members and at 16 he joined the army, with The King’s Own Regiment (Lancaster).

His service was around the UK and Europe and was quickly recruited into the regimental band to play Bass (Tuba),marching at many ceremonial and sporting events, which led to his lifelong love of military band music.  He continued to play his Bass in various bands until he could no longer carry it - which was well into his 80’s.

Whilst in the army he learned to drive just about everything including motorbikes, military trucks and tanks. He was stationed in Egypt as an NCO with the Royal Tank Regiment and he retained a longstanding membership of the Royal Tank Regiment Association.  After being demobilised from the army in 1952, Bill lived in Luton with his brother and found work as a bus driver – this was after spending just one day training and taking a test driving a gearless Crossley double decker bus!

In 1953, Bill returned to Lancaster and joined Ribble Motor Services where he started as a driver, moving to Kendal as an Inspector.  After 40 years of service, he finally retired at Preston where he was a Senior Traffic Inspector with Ribble/Stagecoach. He was often involved with the training of management apprentices, another side of the job he really enjoyed and where he could pass on his extensive knowledge of his own life on the road.  He never did hand in his Traffic Warrant – No T229, which he received on his first day with Ribble Motors.

Bill made many strong working friendships over his lifetime. He was for many years Chairman and Secretary of IOTA Lancashire Centre and served for many years on National Committees, he continued to be involved with the Institute even after he had retired and was honoured to be invited to become a Fellow of the Institute of Transport Administration for his years of commitment.

Bill met Alice, his wife, in Penwortham where they were neighbours and they married in 1983.  Alice was a registered nurse, she shared in Bill’s love of Boxer dogs.  The Preston Concert Band, where Bill continued to play Bass and Alice kept the music library, was also a huge part of their lives.  They also had a love of motorbikes and travelled together on a road trip through France and Germany!  Bill loved repairing old vehicles and motorbikes in particular and was a member of the local Matchless Motorcycle Owners Club who were present at his funeral to escort him on his final journey.

When Alice sadly died four years ago, Bill took up a the hobby of model railways, joined Leyland Model Railway Club and built up a substantial model layout.  He was still largely independent and remained in his home, continuing to drive until the age of 91.

In December 2019 he was admitted to hospital for treatment on his hip and recovery from a virus.  He unfortunately tested positive for Covid 19 and was isolated in hospital before being evacuated to a Care Home where he received excellent care.

Bill was a huge character, he will be remembered as a conscientious, hardworking, extremely loyal and independent man with a wicked sense of humour.  He learned from an early age how to be self-reliant and to make the best of everything.